The Werewolf Village was created by Zack Scott and Brock for playing the game of Werewolf. It first appeared in Episode 47 - Village Site Selection, when they had the idea of going farther southwest than anyone had gone before and then building a village. The idea for the village came from the fact that members of Scottland, such as Brock and Zack, played Werewolf on a forum owned by Brock, they wanted a place to play small games on the server, and so the werewolf village was born.

The village site was initially going to be constructed a little northeast from the current village on a small, level area encompassed by mountains. The two Scotland players then started leveling the area even more, until night came and they created a temporary dirt house. Then Brock started touching Zack while he slept. Then they were both woken up by zombies in the middle of the night.

Episode 49 - Town Hall Construction rolled up when the village was relocated for the third time to the other side of the mountain (further southwest from the original site). This was when, as the name of the video states, the Town Hall was created. This building, once the village was completed, would eventually become the judge house where the players of the werewolf games would decide who would die each day.

Episode 52 - Village Nearly Complete was eventually released and showed that about 10 houses were created. These houses would become the homes of both the villagers, the psychic, the village idiot(s), and the werewolf/werewolves. The first night of each game the Judge would go to each house and assign the different roles to every player with signs. Then every night after that he/she would go to each house to read messages left by the werewolves to see who would be killed.

The next day Zack cheated and created a forest behind the village Episode 53 - Trees and Plugins, replacing the desert. This was the final step for completing the village. With the forest in place, the feeling that the village was cut off from everywhere else was complete.

The original path of death was a lava pool in the middle of the town hall, but soon the player had choice between lava or to be 'hanged' (fall in a deep hole to their death).

More recently the werewolf village was resized to accomodate the extra volume of players by Jenny, Kate and Chris, with a Public Death Pool being built by Chris, and a tavern to host additional, un-housed players by Jenny and Kate.

The village was also featured in one of Brocks's minecraft videos, where he played hide and seek with Jonathuggg, who also had recorded his perspective.

The first person to be lynched in the very first Werewolf game was Ashleysmash and her role was a Villager.

In November 2012 Spintown accidentally burned part of it down and rebuilt it differently.

A house in the village 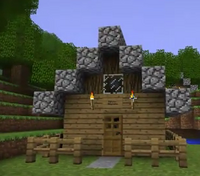 Exterior of one of the homes

The Graveyard at the werewolf village.

The Inn at the village.

Add a photo to this gallery

Retrieved from "https://scottlandminecraft.fandom.com/wiki/Werewolf_Village?oldid=25151"
Community content is available under CC-BY-SA unless otherwise noted.