SwimmingBird941 (aka Adam Holley) is a member of the Scottland Minecraft server. Adam was a fan of ZackScottGames and interacted with Mac and Ashley over social media. SwimmingBird quickly became a friendly and fun person to talk to, so they decided to let him on and become part of the ZackScott server.

He also has a YouTube channel where he makes videos, answers viewer and Yahoo Answers questions, and is just basically a badass mofo. He is an all round good guy, and is just fucking awesome!!!

Adam has built many great things in Scottland, such as the New Year's Eve Balls and fireworks that were used in the livestream episode and resulted in Zack blowing up spawn. {C Along with Zack, Mac, and Brett, Adam competed in the first episode of Versus Mode, taking part in the 7 Diamond Challenge, which he won twice. Alongside Zack and Brett, Adam is part of the Scottland singing group The MacstreetBoys. 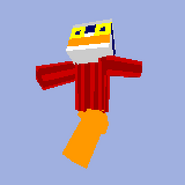 By goldenguy511
Add a photo to this gallery

Retrieved from "https://scottlandminecraft.fandom.com/wiki/SwimmingBird941?oldid=25559"
Community content is available under CC-BY-SA unless otherwise noted.