Jenzillahhhh (aka Jenny), is a good friend of the Scotts, and is a player on Zack Scott's Minecraft server, and is a popular veteran as well.. She and WilWhalen are in a relationship. She's a long time friend of Ashley's and visits the Scott's from time to time with Wil.

She was most recently featured in the Zack Scott Fun Club Video of Unboxing Mail with Zack, Mac, Ashley, and Rozz, and in Episode 350: Webcam Fun.

Jenny has worked on some ambitious projects, as well as contributing to the expansion of the werewolf village due to the larger numbers of players.

Jenny played on the server consistently up until her and Wil fell ill with the flu. Due to their sickness they stopped playing and never returned to doing it consistently. She did return to participate in the Scottland Telethon to raise awareness for podcasts however. She also returned to finally tour her Falling Water House.

"It's my first time!" - Jenny while playing Werewolf on Scottland 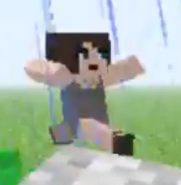 Jenny in an AshleyScottGames video.

Ashley and Jenny having a tickle party on a leopard print bed (her first time).