BVGamer was the only person ever whitelisted in Scottland out of pure spite. Contrary to popular belief, he did not hack in. The self-proclaimed 13-year-old was allowed onto the server momentarily after several hours of constantly trying to log on. The white list prevents unauthorized entrance, but his many failed attempts prompted the players to allow him in for the sole purpose of telling him off, neither knowing, nor caring about his age or opposition to swear words. He complained about his treatment, despite getting exactly what he wanted: access to the server. After being scolded by the players, hit with Back to the Future references by Peter, and killed by Mac, he was removed from the whitelist.

Scottland now has a plugin that prevents the names of failed log-ins from being displayed, removing all incentive for trying to connect without permission and saving players from the annoyance of seeing unwanted names pop up in the chat.

He says he got the IP from Mac on one of LDShadowLady's live streams, but as the IP has accidentally leaked many times it's impossible to tell where he got it from. He certainly was not invited , And he Never shall be .

BVGamer contacted Ashley through her games channel some time after the incident and threatened to reveal the IP if he was not white listed. She responded by posting his demand publically on Google+. He later apologized for this to Zack, instead of Ashley, in accordance with Mormon doctrine of Women Don't Matter Unless You Want Something From Them.

The message in question.
Add a photo to this gallery

The return of BVGamer, with a new request, insult, and thinly veiled threat! 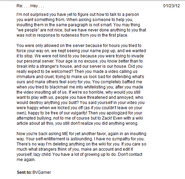 Ashley kindly gives BVGamer a free clue.
Add a photo to this gallery

BVGamer's video (Warning: he is a gay faggot who likes dicks and says he's 13 but is really still an egg/sperm , With hardly any life .) - Paperboy779

Retrieved from "https://scottlandminecraft.fandom.com/wiki/BVGamer?oldid=25332"
Community content is available under CC-BY-SA unless otherwise noted.