The Archery Castle was built by Lockerz12 and visited by Zack Scott in Episode 101 - North ScottLand where he accidently destroyed part of it when a creeper snuck up behind him.

Players were originally supposed to shoot from a white line and hit a set target using a bow.

The Archery Castle currently sits deserted and half destroyed, due to Lockerz12 having been banned from the server.

It has been demolished, as it is now the site of Oli's castle. 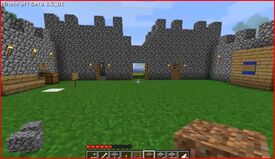 The Castle in Episode 101
Add a photo to this gallery
Retrieved from "https://scottlandminecraft.fandom.com/wiki/Archery_Castle?oldid=23054"
Community content is available under CC-BY-SA unless otherwise noted.